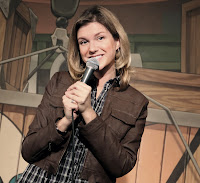 Comedian Kate Brindle will be my special guest for Sunday, April 3rd. Kate has performed her spunky style of comedy all over the United States. She has appeared at California’s Funniest Female Contest and was featured in the International Great Plains Comedy Festival. Over the years, Kate has opened for comedians such as Dave Attell, Kevin Nealon, Kevin Pollak and Thea Vidale.

Originally from Dexter, Michigan, Kate moved to New York City to do stand-up comedy and study acting at New York University. Since then she’s been entertaining audiences at venues across the nation such as Mark Ridley’s Comedy Castle, Jr.’s Last Laugh, Dr. Grins Comedy Club...and every bowling alley, basement and dive in between.


Whether Kate's talking about her family (including her wannabe-gang banger brother or stripper father), dating or making simple observations of everyday life, she continues to charm crowds with her sassy brand of humor. Off the stage, Kate is an avid animal rights activist and has an unhealthy obsession with everything New Kids on the Block.

Kate is currently performing across the United States and Canada. For more info, visit Kate's site: http://www.katebrindle.com/ or the show page!!!
Posted by Vince in the Bay at 11:09 AM